I wanted to explore themes of discomfort, abandonment, neglect and decay. I was inspired by horror movies and one particularly creepy Victorian doll I found at the thrift store (my muse). At the very back of value village I saw a pile of these old china dolls for 3-6 dollars. Back in the day these were luxury items for wealthy girls to play with. Now, they are something nobody would ever want in their homes thanks to movies like Chucky and Annabelle. I’ve thought these dolls are very creepy, but I did feel a little guilty putting her in piles of garbage and hanging her from barbed wire. I wanted her to feel out of place while still keeping a consistent creepy atmosphere.

An Essay by Danielle Jackson

Men used to be the only ones who received recognition in the world of art and media, and they still hold the majority of representation. Beauty and aesthetic ideals were set by men. Since the beginnings of industries like film, modelling and media, a certain ideal of how gender is presented has become a standard. The beauty ideals set for women are constantly changing and impossibly unrealistic. Not to mention the social expectations that come along with our gender presentation. We have created boxes so confining for the role of man and woman that none of us can fit them without bending over backwards. This is especially difficult for women since the ideal woman has been moulded entirely by the male gaze. Since few women are able to fit this mold, the benefits of being desired by men are huge. Men have created a social and beauty standard for women that is rewarding enough that we try and live up to it rather than fighting against it. Society has conditioned women to dream about being a male fantasy instead of an individual with our own fantasies. We have come to the conclusion that it is easier to falsely present our identities rather than to express ourselves honestly. I intend to analyze the male gaze through the art of Cindy Sherman and writing by Laura Mulvey.

Cindy Sherman’s work is quite interesting as she is toying with the viewer by placing the gaze on herself. She is able to reinvent herself using costumes and makeup to embody the roles placed on women in society. This can be seen in Untitled Film Still #6, where she is laying venerabley on her bed half naked holding a mirror, almost as if she is provoking the gaze. She uses clichés like working girl, bombshell and housewife to play up predisposed identities women must embody. All her works are untitled so that it is up to the viewer to interpret these roles and place them on to her. 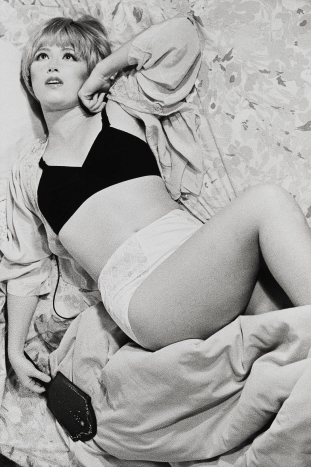 “I am trying to make other people recognize something of themselves rather than me.”

She is not reinventing herself to be who she wants but instead, who men want her to be. In other words: her characters aren’t real and only exist because of how we interpret them. These women that she becomes only exist for a second when the lighting is right and her makeup is done, but once the camera flashes she goes back to being Cindy Sherman. She is creating fiction just like the men who gaze upon us without knowing who we are. Cindy Sherman’s untitled film stills are aimed to make the viewing understand the absurdity of the gender ideals placed upon us. When we gaze upon a stranger we are creating an identity in our heads that doesn’t exist and is only a projection of our desires. We do not like that person, we like the idea of that person that we have falsely constructed. No one can live up to expectations that aren’t authentic and never will be. This plays a lot into the male gaze as women can never be as effortlessly sexy as the women in film, art and media. The role men have constructed for us requires us to be completely submissive and vulnerable without the low self esteem and anxiety that comes along with that. Throughout most of her early film stills, Sherman is practicing the art of deception, a tool women use through their makeup, clothes and even personalities. In contrast to this, Untitled Film Still #175 is showing realism and decay by presenting herself in a state of distress. This work is one of the most popular from what is called her “Fairy Tale Disaster” series. She wanted to create something visually offensive that will further more disrupt the assumed role of woman. Sherman’s face can been seen in the reflection of sunglasses, surrounded by sand, half eaten cupcakes, vomit and molding food. 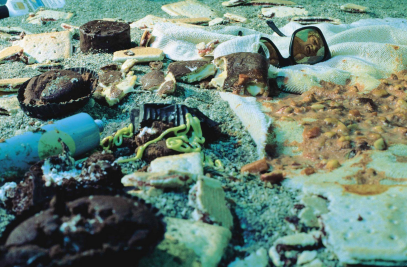 There is a sense of disorder and conflict in this still. The combination of partially eaten food, vomit and the horrified look upon her face implies a complicated relationship with eating. Perhaps it is showing the aftermath of the binge and purge relationship many women have with food. This relationship comes hand in hand with a hatred of our bodies and the feeling of not being in control. Women have been taught to feel that our bodies are all we have, placing this unnecessary importance on them. We feel as though we need to literally make ourselves small to be accepted by men. This comes back to our desire to be seen and gazed upon by men. When we are taught that our sexuality is the only power we have, a toxic relationship can build with our own reflection in the mirror. Women have been conditioned to think that our appearance is our identity. We will do anything we can to keep that small ounce of power that comes with being seen as conventionally attractive. Lastly I want to talk about Laura Mulvey’s Visual Pleasure and Narrative Cinema. In this essay Mulvey analyses women’s role in popular Hollywood cinema. Hollywood does a great job of creating a fantasy. Especially one that is creating by and targeted towards men. Mulvey critiques films like Howard Hawks’s “To Have and Have Not” where Lauren Bacall’s plays the perfect elegant yet passive woman who embodies the male fantasy. Her essay talks about men’s fear of castration and how it is a woman’s role to make a man feel “masculine” but never the other way around. Men are accentuating their perceived power by putting women in their place. Once the man has asserted his dominance, then the woman will fall madly in love with him. In these films, men are the pursuer and women are the pursued. Men are the desirer and women are the desired. Men gaze and women are gazed upon.

This system has been taught to men and women even before the beginning of media production. We have become something to be pursued instead of an individual who pursues. It’s a story that won’t die because men need to feel like they are powerful and women want to use any power they are given. The reason Laura Mulvey analyzes and despises these Hollywood films so much is because she actually enjoys them, which is part of the problem. One of the concerns about this trope is that women have internalized the gaze and place that expectation on themselves. We feel as though we must watch ourselves and even watch ourselves being watched. No matter what we are doing we understand how we are being perceived by men at that moment. Many women have an internal spectator that surveys our actions and appearance from the perspective of a man. Men’s opinions of us have taken on a crucial role in our own psyche. Our perceived success is dependent on our relationship to men and what they are able to provide us. We turn ourselves into objects by only valuing external validation from men. This is not blaming women for this phenomenon, but critiquing the system that set us up to feel this way. It is hard to change or unlearn a system that has influenced us from birth. In order to feel like whole people we must somehow turn off the male voice that exists in our heads, as well as changing the discourse on gender identity that was constructed by men.

Creative women with an audience like Cindy Sherman and Laura Mulvey are paving the way for positive discussion about the gaze and gender identity. Now that women have a voice in the contemporary art scene, we can use that voice to talk about these issues and teach men the biases they consciously or subconsciously possess. We must challenge the gaze and create beauty and aesthetic ideals of our own. Once we understand these structures we will be able to change the gender expectations we have upheld for so long. When traditional patriarchal values are challenged, we are able to loosen the grip of the internal and external male gaze.